This spring, when the country was hunkering down against coronavirus, Chris Packham posted a short clip on Twitter admiring a patch of brilliant yellow celandines on his early morning walk. People liked it, and so Packham began posting daily videos enthusing about spring unfurling around his home in the New Forest. Shortly before lockdown, he was called away for a final film commitment, but still wanted to post a daily video. He persuaded his stepdaughter, Megan McCubbin, 25, to step in. The Self-Isolating Bird Club was born, with Packham and McCubbin, who locked down together at his cottage, using two mobile phones and Skype to broadcast a live daily show online that celebrated our connection with the natural world. There seemed unquenchable thirst for their enthusiasm, their banter, and ordinary wildlife – from nesting blackbirds to badger skulls. Eight million people around the world tuned in over a month of broadcasts.

Five months on, as coronavirus tightens its grip on an increasingly downcast nation, people are again turning to the zoologist and her stepdad, who are now presenting together on BBC2’s Autumnwatch. The secret lives of other species are consoling and cheering, but so is the rapport between McCubbin and Packham. They tease each other, but also nod in harmony over their shared beliefs in the wonder of nature and the importance of activism.

When I meet them at Packham’s home, tucked in the woods west of Southampton, I ask why they think audiences responded so well when they began broadcasting together? “A lot of people were locked down with their families, so it was this mirror image,” says McCubbin. “The familiarity of those relationships are quite nice to watch. People saw a different side to Chris, too, we both relaxed into it. We were ourselves, there was no script. It was just very natural.”

An obsessive, occasionally irascible naturalist trapped with his more free-wheeling stepdaughter who usually drifts between the homes of her mum, dad, Packham and her partner, sounds like a recipe for conflict. What irritated them during lockdown?

“Oooh, the list comes out,” laughs McCubbin. But Packham’s having none of it: “We are quite unspokenly sensible. There are certain things that each one of us can do which the other one can’t do well, or at all.”

The Self-Isolating Bird Club was classic Packham: he did it himself. Ever since the teenage Packham lowered his record player needle on to the opening track of the Damned’s Damned Damned Damned LP purchased from Woolworths in March 1977, he has been in thrall to punk music and its rebellious, DIY principles. He abandoned a doctorate to become a wildlife cameraman and then, despite his long-hidden Asperger’s, or perhaps because of it, talked his way into presenting a hugely successful children’s series, The Really Wild Show, when he was 25. He’s rarely been off screen since. But a prolific career as an increasingly cherished TV naturalist has not hindered a myriad of other creative projects – Packham paints, takes professional photographs, wrote an astonishing memoir called Fingers in the Sparkle Jar, and has become an outspoken voice against this age of extinction. In the past three years alone, he’s organised a mass march for wildlife, corralled experts to write A People’s Manifesto for Wildlife and co-founded Wild Justice, a crowd-funded legal group that has successfully challenged the government’s treatment of wildlife in courts. His latest side-project? A calendar celebrating animal poo, photographed, written, designed and sold by himself via his website.

Another theme of these endeavours is Packham’s eagerness to collaborate with young people. Alongside his creative partnership with McCubbin, Packham readily admits that the Self-Isolating Bird Club only took flight because of a “unique wizard”, a 21-year-old conservationist called Fabian Harrison, who met Packham at his wildlife march and told the broadcaster he could much better “maximise his social media potential”. Packham handed over his passwords to Harrison – “I might be nearly 60, but I still take risks,” he says – and Harrison produced their online show from his bedroom in Norwich. 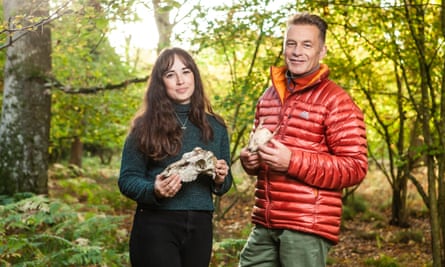 “He was the brains behind it,” says McCubbin. “He was the real driver. He said, ‘We can get live guests in from around the world and we can show live cameras of birds from anywhere you want.’ He had this vision and drove us.”

The success of the Self-Isolating Bird Club and its intimate focus on local wildlife may yet prove to be transformative in how wildlife television is made. More immediately, it transformed McCubbin’s working life. Springwatch, a fixture in BBC TV schedules since 2005, was looming but because of lockdown, Packham’s main co-presenter, Michaela Strachan, couldn’t travel from her home in South Africa. So McCubbin was thrown into presenting duties alongside Packham. “It’s different obviously, Michaela and I, and Megan and I,” says Packham, “but that chatty interaction, unscripted banter, a bit of frivolity, was there. I think [Springwatch‘s producers] saw that happening [on the Self-Isolating Bird Club] and thought, ‘We can’t miss a trick here.’ It made sense. But they just needed to trust Megs to pull it off.”

McCubbin was understandably nervous, having never presented live TV to an audience of millions. “As I repeatedly said to her, you’ve been doing it for weeks online, with no script and no planning,” says Packham.

There was a hugely positive audience response to a young woman joining the Springwatch presenting team, but did McCubbin receive social media barbs that she only got the gig through her stepdad? “There’s been a couple of comments, definitely, but not as many as I thought. I’ve worked hard getting my degree, researching and getting involved in science. But being around Chris I know is a huge privilege. I’m very aware of how lucky I am.”

“But you’ve still got to be able to do the job,” chips in Packham.

As a child, McCubbin – whose mum, Jo, was Packham’s partner for a decade – travelled with him as he made wildlife programmes. She was initially hesitant around some animals, such as the family’s pet tarantula, but credits Packham with shaping her love of nature. When her mother split from Packham, he and McCubbin remained close. “He took me to art galleries, the opera and punk rock gigs – he showed me the whole spectrum. But when you go on set and there’s lion cubs around, it’s hard not to go down that route.”

So much has changed, but we now need a green revolution. It’s coming

Did she learn from watching him communicate complicated natural science on live TV? “I like to take my time and prep a little more than Chris does because he can just turn up and they’ll tell him five minutes before he goes live, ‘You’re talking about the hairstreak butterfly today,’ and he’ll just ramble it off without any prior preparation.”

“I don’t know if you know this, but Chris is half alien,” whispers McCubbin. “There is something extra- terrestrial about him. I often say I’d like a sliver of his brain, and he kind of smirks.”

Packham has experienced the fluctuations of a career in television. Was he worried about McCubbin following in his footsteps? “Megs knows that TV is not the be-all-and-end-all. It’s not about saving lives, it’s about trying to share a passion, entertain and inform people. You’ve got to have other interests. If Megs had said to me when she was 12, ‘I want to be a TV presenter’, I would’ve been horrified, because it’s one of those things you’re better off drifting into. Then it’s not about your ego, it’s about your purpose.”

As part of their drive to convince us to better cherish other species, Packham and McCubbin have also spent this summer writing a book together, Back to Nature. It celebrates the bond with wildlife that many formed for the first time while confined at home this spring, but also explains the biodiversity crisis and examines contributors to this great wave of extinctions – from salmon farming and pesticides to the persecution of hen harriers. It is well-researched – with McCubbin providing short scientific interludes – and more nuanced than you might expect from Packham’s many Twitter rants. Is he becoming more diplomatic in old age?

“No, I’m getting more strategic,” he says. “I got very angry this afternoon about the Japanese restarting whaling. I don’t blame the Japanese, I blame the world’s conservationists for letting them do it. They just said, ‘Er, that’s not a very good idea at all.’ And then nothing happened. It’s our fault. I still get very angry. There’s no dulling of the blade. The blade if anything is getting sharper and more useful because I’m running out of time. There’s less time in my lifetime to make a difference.”

And so Back to Nature is also an invitation to take action, showing how ordinary people can help wildlife and become activists. Does McCubbin, for all her tact, belong to a generation of young people who are more radical than Packham’s punk peers? “I think we have to be,” she says. “We are growing up in a time when we’re going to see the climate crisis more than generations before. Kids younger than me are going to really feel it – and their children certainly will.”

So far, however, despite parliament’s pledge to go net zero by 2050, there seems more patronising head-patting of the young than action. Since the world was consumed by coronavirus there’s been hopeful talk of a post-Covid “green recovery”, but the British government has pledged a pitiful GBP40m to green jobs creation while throwing half-a-billion at Eat Out to Help Out and billions more on HS2 and new roads. Business as usual.

“It’s buffoons as usual,” says Packham. But he and McCubbin remain surprisingly hopeful. “You need to mobilise 3.5% of a population in order to see proper legislative and policy change. It’s not much at all,” says McCubbin. “So much has changed because of peaceful activism. Look at the civil rights movement and the suffragettes. We’re now at a point where we need environmental change and we need an environmental revolution. That’s coming.”

“The problem is, we see the world as a big place. It’s not. It’s a small place,” says Packham, “You drive from Land’s End to John O’Groats 30 times and you’ve reached Australia. It’s a relatively small planet and everything we do as individuals, wherever we are, influences other individuals in other parts of the planet, and that recognition will kick in at a certain point. Then change will happen quite quickly.”

Back to Nature: How to Love Life – and Save It by Chris Packham and Megan McCubbin (Two Roads, GBP20) is out on 12 November. Buy it for GBP17.40 at guardianbookshop.com

Tree of the week: ‘This black pine represents how nature forces change on to living things’

Overlooked and unloved: how a global project could unlock the world of parasites

The Guardian view on Brazil and the Amazon: don’t look away | Editorial

Tree of the week: the crab apple tree that makes booze

Dire outlook for native freshwater fish with 22 species given less than 50% chance of...