I walk along a deer path barely visible between the bracken. The late-morning sunshine is dappled, leaf-filtered. “There!” says Claire.
She is my companion for the day. We are tree hunters, seeking out aged oaks in this Eden of ancient woodland. She has just spotted one and leads the way through the fronds. We are in the wild expanses of Wiltshire’s Savernake Forest, near Marlborough, surrounded by the North Wessex Downs. A few miles away are the prehistoric wonders of Avebury and Silbury Hill – but our interest lies in the woods.

I have travelled from my home in north Essex to meet some of Britain’s oldest inhabitants. This is a new forest to me, a vast area covering some 1,800 hectares (4,500 acres). Though such treescapes once covered much of the land, now only 2.4% of Britain is ancient woodland. 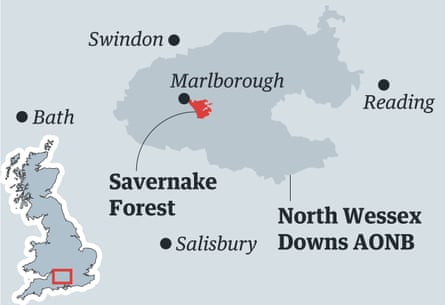 We fall silent as we step gently through the undergrowth to the oak before us and reach out to touch the rough bark. We circle the oak like treecreepers. A still fills the air. Above me, the vast canopy of branches and leaves reaches a hundred feet into the blue sky.

The oak beside us has sat on the same spot for 500 years. It is this simple fact that makes these oaks guardians of their locales. Something in that steadfastness is endlessly appealing. It also makes them quite easy to track and trace: to find your closest ancient oak, simply search the Ancient Tree Forum – an inventory of the oldest, best-known and most revered trees in Britain. Or head to one of the remaining areas of ancient woodland and simply wander. There is a distinct delight in stumbling across these aged figures of the forest.

We move on. In the wilds of Savernake Forest, Claire and I will walk away the day in the fractured leaf-light, getting gloriously lost, arriving every now and then at another aged oak whose limbs stretch in a different way, whose entire demeanour is distinct and which we cannot pass by without a greeting. 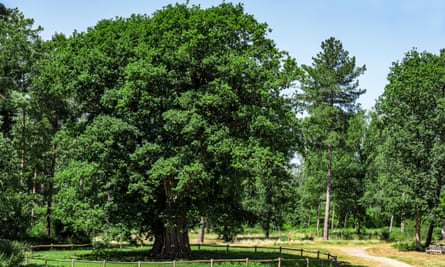 My search for ancient oaks started when I visited an 800-year-old called the Honywood Oak on the Marks Hall estate, near Coggeshall in Essex. I wanted to get to know more of the ecosystem of an oak tree, to learn of the complex array of creatures from birds to bees to minute insects that live within it. For the next two years, I spent many hours beside that oak – at all times of the day and night, in rain and sun and snow. I also unearthed the story of the 300 other ancient oak trees on that same estate, which were cut down in the 1950s for timber.

Of the many other ancient woodlands that I visited, none could match for scale the Forest of Dean in Gloucestershire, which extends across 42 square miles. There you can walk along wooded glades up to the rocky heights of Symonds Yat, where you may also see peregrine falcons as you gaze down on the River Wye far below. Then there are the delights of the forests that were once deer hunting grounds, such as at Hatfield Forest in Essex, with its stunning aged pollarded oaks and hornbeams. At Windsor Great Park, 2,020 hectares of what was once royal hunting forest are mostly now accessible to the public. One of its oaks even gets a mention in Shakespeare’s The Merry Wives of Windsor as the haunt of local stag-horned ghost Herne the Hunter.

Yet many of the surviving ancient woodlands of Britain are rather smaller parcels of greenery. One of my favourites is Queen’s Wood in Highgate, north London: it is home to a number of wonderful aged oaks – four of which are currently being actively protected from felling by the Save the Queen’s Wood Oaks campaign. 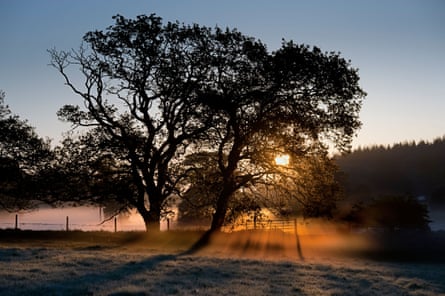 I have learned, too, how oak trees are closely tied to human existence, culturally and historically. Wherever oaks grow around the globe, people have connected with them. In prehistoric Britain, the druids were protectors of the oaks. “Druid” is a Celtic word formed from dru, meaning “oak”, and wid, “to see or know”. The druids had “oak knowledge”.

Today, the ancient oaks could do with some more protection. In Britain, many fine old oaks are still being felled to make way for new development. Huge infrastructure projects such as HS2 are tearing out trees that are centuries old. Some majestic oaks have been felled along the Fosse Way in Warwickshire; a 300-year-old oak was recently cut down near Leamington. We would do well to remember the vital role that ancient oaks play. A single 400-year-old oak can support more than 2,000 bird, insect, fungus and lichen species. Each tree also produces 234,000 litres of oxygen a year.

We may no longer rely on oak trees to build our homes, or to keep us warm and fed during winter, but there are still very good reasons to head out into the ancient woodlands. Japanese shinrin-yoku, or forest bathing, is gaining increasing interest in Britain. The positive effects of heading into the trees are becoming better understood – science is showing that merely stepping out into green spaces improves wellbeing. 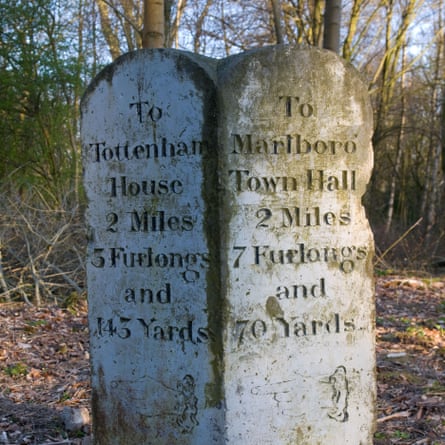 “There are certain phytoncides – chemicals given off by plants, including oak trees – which can affect our physiology,” says environmental psychologist Dr Mike Rogerson. “It’s the basis for aromatherapy. Some of these phytoncides relax, some stimulate, and some even boost our immune systems.”

No wonder, then, that Claire and I fairly skipped about the overgrown pathways of Savernake Forest. The very air was full of goodness, while our childlike delight at the aged oaks we found was born of a connection with oaks that our neolithic ancestors would have understood. With the delicious touch of autumn now in the air and a slanting, low sunlight slicing across dewy grass and lighting the leaves as the last acorns fall from the trees, this is the perfect time to explore the precious remaining ancient woodlands of Britain and meet some of the venerable oaks that still live on these lands.

Going down to the woods is good for you. We are calmer and happier beings when we step into the trees. 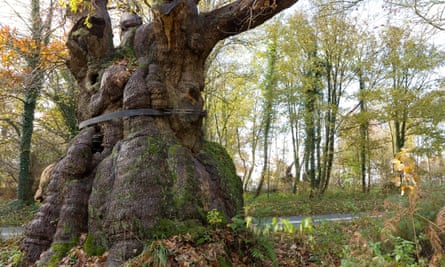 Savernake Forest, near Marlborough, Wiltshire
Britain’s only privately owned forest is managed by the Forestry Commission – a status that is maintained by shutting the forest to the public one day a year – and it contains many ancient oaks. The oldest of the pollarded trees is the Big Belly Oak beside the A346 – one of the 50 Great British Trees named in honour of the Queen’s Golden Jubilee. It has a girth of 11 metres, which dates the oak to 1,000-1,100 years old. Radiohead’s 2011 album The King of Limbs is named after Savernake’s King of Limbs oak, which can be found near Tottenham House. 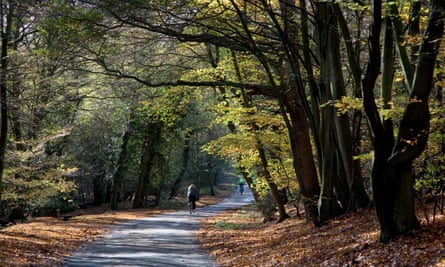 This vast, 2,400-hectare area of ancient woodland runs south from Epping in Essex to Forest Gate in Greater London. The best way to explore the aged trees here is to follow the veteran tree trail offered by the Ancient Tree Forum. Epping Forest District Council has also created a guide to the favourite trees of the forest. But it’s very rewarding to simply wander the footpaths through the woods, as poets such as John Clare and Alfred Lord Tennyson did in the 19th century. 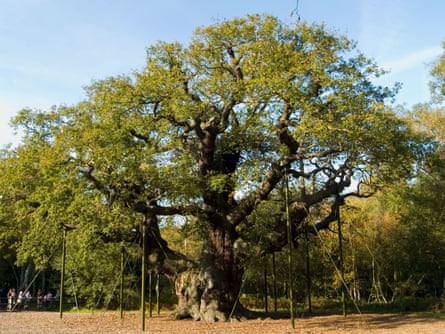 The famed woodland home of Robin Hood and his Merry Men houses the wonderful Major Oak (pictured) – Robin’s main hideout according to local folklore. The oak is between 800 and 1,000 years old and well worth a visit. Since Victorian times it has had to be artificially supported, several massive limbs propped up by scaffolds. The 375-hectare forest is home to hundreds of other ancient oaks. A variety of well-marked walks and trails lead around the ancient woodlands, following in Robin’s footsteps.
o Parking free for RSPB members, GBP4 for non-members 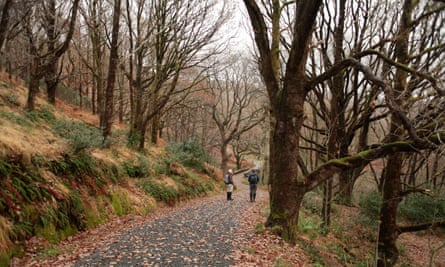 This delightful 42-hectare ancient woodland of upland oak and open water in one of Britain’s least-inhabited areas is wonderful to simply wander in. There’s an impressive list of species to keep an eye out for, including pied flycatcher, redstart, tree pipit, meadow pipit, grasshopper warbler, wood warbler, Leisler’s and pipistrelle bats, red squirrels, tawny owls and dark green fritillary butterflies. More adventurous souls might head to the Glentrool Oakwoods, where there is even more sense of being lost and alone in the woods. 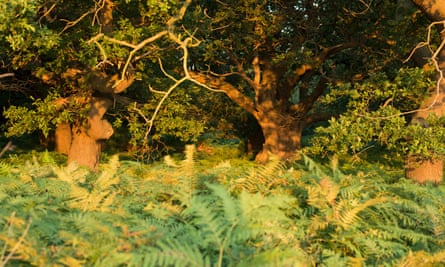 A rather well-hidden gem covering 80 hectares, this site of special scientific interest is a former deer park that consists of ancient woodland dotted with mature pollarded oaks. Some of the largest holly trees in Britain are here too. Access is via a public footpath through this really magical place.

James Canton is director of the Wild Writing: Literature & Landscape MA course at the University of Essex and author of The Oak Papers

The UK government was ready for this pandemic. Until it sabotaged its own system |...