Security had been told to expect an artwork for the secretary of state at 9am. Perhaps they were not expecting it to be an enormous chunk of granite painted with squid ink and so heavy it will need a crane to remove.

The artist Fiona Banner and a team from Greenpeace deposited the 1.5-ton artwork outside the Westminster offices of the Department for Environment, Food and Rural Affairs (Defra) on Monday.

Titled Klang, it supports Greenpeace’s direct action campaign against destructive and illegal fishing in the North Sea, which has involved dropping huge boulders in the Dogger Bank area to disrupt trawlers.

The artwork was sculpted from granite taken from the North Sea, which brought its own challenges. “I was astonished to be working with material which was just so dense and heavy,” she said. 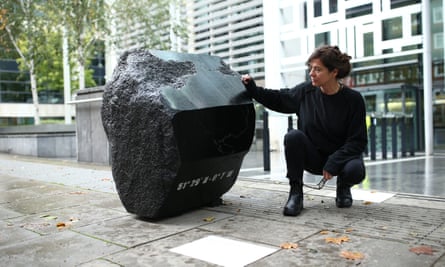 The original intention was to carve something perfect but “once I started I realised it was completely resistant to human intervention. In the end that is nature telling us that it cannot, will not, continue to bend to our will.”

She made three sculptures using a powerful robot-controlled diamond cutter. Two of them, Peanuts and Orator, are heading by boat to the North Sea to be dropped by Greenpeace while Klang will remain outside Defra until authorities decide what to do with it.

Banner described the illegal bottom trawling of the North Sea as “like taking a bulldozer through an ancient forest”.

She sees the debate as not just about fishing in the North Sea. “It’s the future of humankind,” she said. “Here we are still in a pandemic, viscerally aware of our vulnerability and the vulnerability of nature. We know we all really need to act. Deploying the sculptures in this way is I guess a way of recognising we need to act beyond language.”

Greenpeace has said it will remove the boulders it is dropping in the sea – including the artworks – if the government takes credible action. What happens to the one in Westminster remains to be seen. “It will be quite hard to move. They will probably have to get a crane,” said Banner.

Banner, who once installed a Harrier jump jet in Tate Britain, has been sculpting full stops over two decades.

These works are materially different in that they have been painted with sustainably sourced squid ink. “We can’t put anything in the water that is toxic,” Banner said, “but they do smell a bit fishy. I was in the house the other day saying what’s that smell, what’s been going on and eventually it was traced back to me.”

A Defra spokesperson said: “We are putting sustainable fishing and protection of our seas at the heart of our future fishing strategy. We have already set up a ‘Blue Belt’ of protected waters nearly twice the size of England and the Fisheries Bill proposes new powers to better manage and control our Marine Protected Areas and English waters.

“The Common Fisheries Policy currently restricts our ability to implement tougher protections, but leaving the EU and taking back control of our waters as an independent coastal state means we can introduce stronger measures.”

Tree of the week: ‘This black pine represents how nature forces change on to living things’

Overlooked and unloved: how a global project could unlock the world of parasites

Up to 48 species saved from extinction by conservation efforts, study finds

‘Lockdown has been a wakeup call for the industry’: what next for fashion?