Ministers have been accused of deliberately stalling plans to ban the environmentally damaging process of burning peat bogs, in a further sign of government support for people who enjoy shooting grouse on moorlands.

After a week in which it emerged that people who shoot grouse had been exempted from the “rule of six”, which limits gatherings in the fight against Covid-19, activists believe the environment secretary, George Eustice, who is from a farming family, is blocking moves to ban peat burning.

Campaigners have long opposed the practice of burning peat bogs to encourage new heather shoots – a source of food for grouse. In January, government advisers on the committee on climate change said it should ban peat burning this year, but a new strategy is not expected for months, until well after autumn burning has taken place.

The row comes before the prime minister, Boris Johnson, is due to make a major speech on the environment in the next few weeks. In it, he is expected unveil a vision of how to “build back green” after the coronavirus crisis.

However, Johnson has been beset by a series of recent major environmental headaches that raise serious doubts about his government’s green credentials. The peatland row will only add to these woes.

These other problems include:

o The decision by Hitachi to scrap construction of the GBP20bn Wylfa Newydd nuclear power plant on Anglesey, a move that throws UK plans to use atomic energy to replace coal and gas power stations into complete disarray.

o The appointment of the Australian climate change sceptic Tony Abbott as a UK trade adviser, a decision that has been widely criticised by campaigners.

o The failure of Johnson to counter the constant attacks by the US president, Donald Trump, on international climate talks at a time when Britain is preparing to host the next major summit on limiting global carbon emissions.

It is against this background that the peatland row is now gripping the government. Peatlands in the UK hold about 400m tonnes of carbon, double the amount of all the UK’s forests put together, and are vitally important to helping tackle climate change.

The process of burning peat to create better conditions for rearing grouse can severely damage the ability of peatlands to lock in carbon. 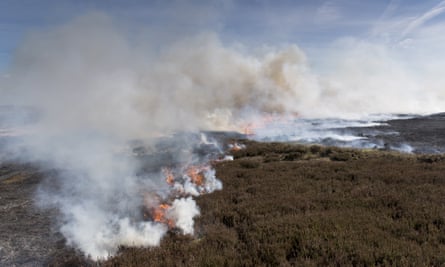 Last week the pro-Green environment minister in the House of Lords, Zac Goldsmith, told peers that the burning of peat would be phased out by the government soon. He said: “The government have always been clear – as I have – on the need to phase out the burning of protected blanket bog to conserve those vulnerable habitats. We are looking at how legislation can achieve this and are considering next steps.”

However, environmentalists believe there are tensions in the department and that Eustice is blocking an outright ban.

In response to inquiries from the Observer about its strategy on peat and whether it intended to press on with a ban on burning, the Department for Environment, Food and Rural Affairs (Defra) made no mention of a ban at all.

It said: “This government remains dedicated to being a world leader in tackling climate change. Healthy peatlands have an important role to play in cutting greenhouse gas emissions and helping us reach our net zero target, which is why we have committed GBP640m through the Nature for Climate Fund to restore 35,000 hectares of England’s peatland by 2025.

“We will also phase out the use of peat in horticulture in England by 2030, and have been clear that we will consider further measures to end the use of peat once and for all.”

Friends of the Earth campaigner Guy Shrubsole said the government was stalling and had to act before burning starts again next month: “Moorlands lock up millions of tonnes of climate wrecking gases and give important habitats for wildlife. Despite their key part in fighting climate breakdown and protecting nature, we’re still yet to see a ban on them being burned.

“The government has been promising to ban destructive moorland burning for the past year, but has failed to step up and do it. Enough is enough. The environment secretary, George Eustice, must ban moorland burning now, before the burning season starts again on 1 October, and stop another cycle of destruction.”

When he was environment secretary in 2017, Michael Gove
launched a consultation on a new “peat strategy” to consider outlawing peat burning because of its damaging effect on the climate.

The RSPB says that peatlands in Britain are also vital for wildlife, providing “a globally rare habitat that’s home to many special plants and animals, including lichens and mosses, peatland waders, diving beetles and otters”.

It is also understood that the chancellor, Rishi Sunak, whose Richmond constituency is close to moorlands in north Yorkshire, is sympathetic to those who run grouse estates and shoots.

Amanda Anderson, the director of the Moorland Association, which was set up in the 1980s to counter a decline in moorlands, said: “Careful burning is carried out by our members to control the vegetation above the peat. Our aim is to leave the peat, and moss layer intact.

“The science of the effects of heather burning remains very complex and uncertain, but the known devastation caused by wildfires burning over grown vegetation is very well documented and negatively affects air and water quality for thousands of people each year – not to mention the enormous greenhouse gas emissions from wildfires like Saddleworth Moor burning for weeks. We need a balance.”

EU and US block plans to protect world’s fastest shark

Biodiversity in Britain at risk from standstill due to coronavirus

‘It climbed on my son’s finger’: readers’ photos from the Big Butterfly Count

Witness K is in the dock but institutions vital to Australia’s democracy are on trial...