The sense of time-slip begins during the summer megafires. Walking my children home from school in Sydney under a red sun I have the nagging feeling, beneath my anxiety, that I’ve seen this close orange light before. Then I remember. My father made our family nativity set out of pumpkin-coloured cardboard, topped with a skylight of red acrylic. The sideboard lamp cast the same uncanny glow on to baby Jesus and his shadowless entourage.

Three months later, in early March, my partner and I are driving the twins down the south coast through green dairy country to isolate from the coronavirus. “Does the sky seem particularly blue to you?” he asks as we look up the valley. “I’m having a ‘severe clear’ moment.” A dark joke between us: pilots used the term to describe a sky of perfect visibility on the morning of 9/11. With most planes cancelled, there are no bright contrails in the usually busy flight path above the escarpment. The air is alert and tender. It occurs to me that we haven’t seen a sky like this since our own childhoods, near the beginning of the Great Acceleration, when the indicators of human activity on the “planetary dashboard” began their upward surge. 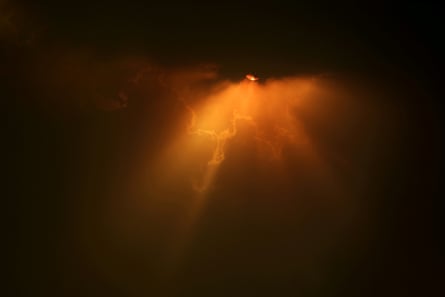 For this whole first week we feel strangely elated. When we last stood in the back paddock of this Airbnb at Christmas, we watched a huge pyrocumulus build above the Currowan megafire, 4okm to the south, as white ash fell on to the brown grass around us. When it sucked the oxygen from the air, we fled. But over the next months, as the eastern seaboard of the country burned, the fires spared this pocket of rainforest tucked beneath the Barren Grounds reserve. Huge rains fell in February, the owner tells me, as she keeps her social distance, overflowing the creek and tumbling huge boulders down its bed. The flowering gums in the bush around us give off a scent of honey, and the calls of tiny birds electrify the air.

Stop the World: I Want to Get Off. My mother used to jokingly quote the title of this musical to me when I was little. “Stop the world,” its hero said whenever things went wrong. I’ve been feeling this way for the last few years. I can’t help feeling relieved that the world has at least paused now.

Like Melville’s Ishmael, I am a natural “Isolato”. An only child and a writer, I’ve been training for this moment all my life. But it’s not just me taking pleasure in a world temporarily stilled. A friend texts me video his brother has filmed in Rome of a man walking naked on an empty bridge across the Tiber. On Twitter, people tweet and retweet images of trafficless Venetian canals, water so calm you can see fish in their powdery aqua depths. Video recorded by an unseen man walking the city’s empty calles and bridges goes viral: “Bizarre!” he concludes at its end. I email my publisher. When was the last time the canals were this magically glassy – when the Brownings were restoring the Ca’Rezzonico, or in Casanova’s time? He replies that he is amazed by the grand scale of these uncrowded public spaces. “You look at old pictures of Venice and St Mark’s square is almost empty – really, they’re different places entirely. The stones of Venice come into their own.” 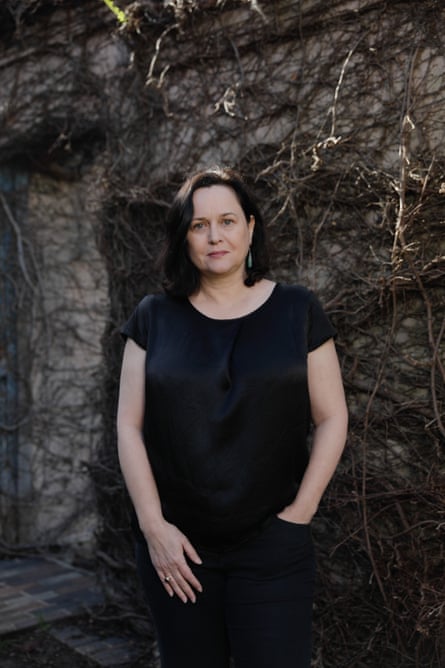 We give the twins a phone and a snake bandage and they explore the paddocks while we work. Their saxophone and flute lessons continue by Skype. At the lip of the cliff at the end of the garden they watch a lyrebird go through its repertoire of other birds’ songs with the fixed concentration of a flasher, tail feathers lifted stiffly over its back. I chalk this up as a win for home-schooling.

Online, we watch events unfolding at a distance. Our neighbourhood Facebook group fills with queries about whether it is possible to train safely in shared apartment gyms, if balayage will be considered an essential service, and whether favourite restaurants will deliver. Newspapers report toilet paper hoarding while conspiracies circulate that buses are descending on small towns to clear the shelves. A German friend says there is a word for this in her language: Hamsterkaufe – rodent purchases.

Back home, in an inner-city apartment with no veranda or yard, it is harder. The children need constant help with their year 3 school assignments, which are distributed across Seesaw and two different versions of Google Classroom. My partner and I work fitfully at our own computers. When a hairy, shirtless man in the block next door starts playing guitar to the neighbourhood kids from the outdoor walkway, I feel like putting my head out of my study and yelling, “This isn’t Italy, mate!” In the bathroom, my daughter switches from singing Happy Birthday to the Sex Pistols’ God Save the Queen while she washes her hands. As the death toll in Italy and Spain rises, I read an interview with a virologist who says he is so attuned to particles of virus that his view of every surface is “pixellated”.

The threat level rises after we learn that a cruise ship, the Ruby Princess, has been allowed to disgorge its passengers, unchecked, to wander through the city. Many further their travel, some untraced. I search for clips of the plague ship arriving into Delft in Herzog’s Nosferatu and instantly regret it. On the neighbourhood Facebook page, pleas burn and flare out as bargaining turns to acceptance. Where is it possible to still find good charcuterie? Is there a mobile nail service that might visit? Does anyone know anything about agencies for fostering dogs? When crowds mass at nearby Bondi in the autumn heat, ignoring restrictions on large groups, all the beaches in the eastern suburbs are ordered to close. The council fences off the exercise equipment in our park, which has also been busy, and heaving joggers take over the paths.

I begin to walk with the children to the city instead, to the empty Botanic Garden, along the least-used of the long historic staircases that plunge down the Woolloomooloo Bay cliff. “Look,” I say to them, as we stand across from where the foundations for the huge extension of the Art Gallery of New South Wales are being dug. “You will remember this.” I was their age when I used to pass the half-built “Lego apartments” which now occupy the clifftop behind us, as my parents drove to my grandmother’s each weekend. My father always repeated the rumour that the missing heiress Juanita Nielsen, who fought the developers trying to destroy the historic Potts Point streetscape on which the apartments were built, was buried in the foundations. 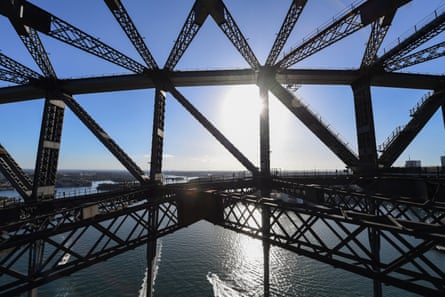 “Look,” I say again, as we drive back one afternoon from helping my mother, who still lives in the family home on the north shore. “You will never see the Harbour Bridge as empty again in your lifetimes.” “Is it really empty? Was it this empty when you were growing up?” my son asks as we pass only a handful of cars on its 10-lane approach. Yes, I tell him, there were 2 million fewer people in the city, which was still in parts a Victorian ruin. We fly over the Cahill Expressway, above the Quay, where no ferries or charter cruise ships move, and on, through an empty Woolloomooloo, as their childhood melts into mine.

Ecologists write about shifting baseline syndrome, in which each new generation takes the reduced world of creatures it grows up with as the starting point for measuring the loss of natural abundance. But now, as if in a time machine, we seem to be glimpsing a new past, or at least an alternative baseline – a world in which we’re less intrusive. The viral images of swans and porpoises in the Venetian canals have been debunked but they are still circulating on my social media feed because the desire to believe in them, or their promise of a different future, is so strong. As if anticipating new freedoms, a long green tree snake is photographed climbing the curved Deco brickwork of an apartment in nearby Potts Point. A friend in lockdown in a Spanish village reports: “There are numerous owls everywhere around us … and they have really become gaily, proudly, shamelessly symphonic during humanity’s lockdown!” 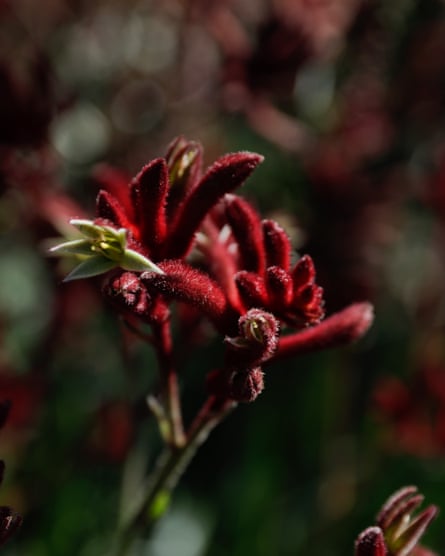 Throughout April, infections in Australia continue to rise, a significant percentage of them from the Ruby Princess. At least children don’t seem to be dying, we say quietly to the godparents on the phone. In the Botanic Garden, a security guard now moves on people sitting on the grass or squatting by the pond, where eels patrol the perimeter as if in parodic imitation. Police cars drive along the footpaths of our local park to fine people sitting in the sun but do not stop the joggers. A historian friend gives the children an hour-long lesson on FaceTime and tells them that the first year of Sydney’s settlement began with plague, asking them to imagine the Aboriginal people who died from smallpox within the first months of the first fleet’s arrival.

On our neighbourhood Facebook page, people post pictures of sunsets, rooftop concerts and video graphics from a Belgian-Dutch study showing that joggers’ and cyclists’ breaths can infect from a distance of five metres, which they then accuse the group administrators of deleting. Although I vowed I would never have one in the house, I have a small coffee pod machine delivered and look out on to a street filled with couriers’ vans. A group of us who used to meet a decade ago revive our fortnightly games night through Zoom and we find ourselves speculating, over wine, that we are in for a much longer lockdown than we first expected. I text a friend whose mother has just died. “I’m sitting out the back behind our house looking at a planeless sky,” he texts back. “It feels like the end of the world.”

Meanwhile, on my feed, images keep appearing of turtles laying eggs on empty Indian beaches and flocks of wild goats besieging a Welsh town. But nature, it seems, is not getting as much respite as I hoped. Airlines are lobbying to loosen their carbon-lowering obligations once borders reopen, while Trump’s southern wall, dividing the fragile and biodiverse wildlife of the borderlands, reaches completion almost unnoticed. In Australia logging continues in the stands of eucalypts that survived the fires and the government announces a review of environmental “green tape”. I read a study predicting wildlife collapse from climate change will happen suddenly and quickly – a cliff edge rather than a slippery slope – and the future rushes in again. 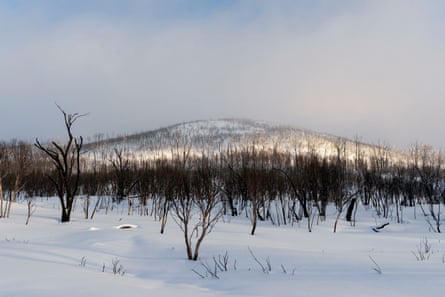 Over the last few years I have been writing about our entry into the Anthropocene and the way, even as the present accelerates, we are haunted by the deep past, in the form of the fossil carbon we have released into the atmosphere. I have found it unbearable to think too far into my children’s future or to answer their questions about what they might be when they grow up because I do not believe it will resemble the present in any way. After the fires, I was bracing for another disaster, although I can’t help feeling that this one is only the grace note, with its intimations of alternative futures that later catastrophes will not give us.

What I didn’t expect was that time would become so kaleidoscopic.

At the beginning of lockdown, friends on Facebook participated in a viral “challenge”, posting photos of their younger selves. It is a bittersweet thing to look at them now. All those soft young faces.

o This essay will be part of the anthology Fire, Flood and Plague, edited by Sophie Cunningham and published by Penguin Random House in December

There’s a simple way to green the economy – and it involves cash prizes for...