Investors Guide Club
Home News Racism burns Australia like pox and plague. We’re not all in this...

For a studied introvert with a writer’s routines, the duty of social isolation is reassuring. In such a tumultuous year I realise I’m extremely lucky to be a homeowner, securely employed and gifted with – as well as the baby boomer years – certain contraband privileges of whiteness.

With all that luck, it may seem hard-hearted and selfish of me to insist on telling you what I’ve missed out on so far in 2020. Not just the fear of missing out, you understand, but the actuality.

In late February I had planned to be part of a small group of people visiting a remote beach on the south coast of Western Australia to continue reuniting an Aboriginal creation story and song with its landscape. Our group would be comprised of Noongar traditional owners – people descended from those that first created human society in this part of the world – and staff from two conservation groups, Gondwana Link and South Coast Natural Resource Management.

The story had been transcribed by a linguist who’d passed through nearly a hundred years ago. The son of the linguist’s informant son would be with us. One of the stolen generations, he hadn’t heard the story, but he knew of the song that accompanied it: a pack of hunting dogs bursts from the trees. They leap through flames and roll into the sea. Swimming with burnt and stumpy limbs, they raise their heads and bark. See how it goes? The dogs weren’t destroyed, they were transformed.

There was fire in the story and song we carried and, at the same time, fire was raging all around the nation and a ferocious local heatwave banned all vehicle movement in paddocks and bush. So that trip was cancelled. We made new plans, vowing that nothing less than a pandemic would stop us. It did.

A few of us had visited the site before, relying on hints from the linguist and his informant along with a few scattered memories of where the story belonged. I remember a little over half a dozen of us walking to the far corner of the beach’s sandy smile. Sheltered just beyond the calm sea’s reach, a fishing net had rolled itself up into a rocky crevice and filled with sand. Some birds had made a nest. “Oystercatcher” is their common name, “Kooran-kooran” in Noongar language; you often see them quick-stepping along the ocean’s edge.

I hadn’t realised it was a nest but, as we got closer, we saw the young birds staring back at us even as we crouched and spoke to them. Someone reached out a hand. Too young to fly, the birds skipped away along the rock sheet and disappeared between rocks in the shallows. They’re very good at hiding. Opportunistic, too; their parents made that curious, hybrid nest near the base of the very slope down which the flaming dogs rolled.

The sandy dunes either side of the headland were crowned with a thin layer of crumbly, red rock. It might have been evidence, or memory, of fire. A boulder, half-buried at the edge of those dunes could have been a seal, one of those that didn’t make it, arching upwards in its death throes. We scanned the ocean, looking for live seals.

In that old story, in that very landscape, a man lit a fire that began in a circle around his errant dogs on the hilltop, then marched down the slope to the sea. It was a very controlled fire. 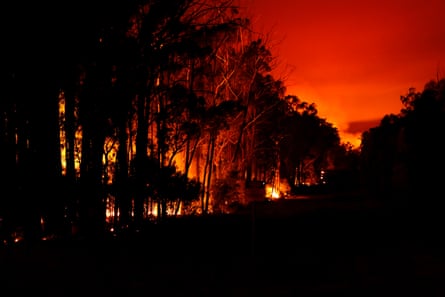 Controlled is not a word you’d use to describe Australia’s 2020 bushfires, our wildfires. They howled and devoured like fiery beasts themselves, they incinerated and razed.

It’s tempting to think of 2020’s floods and fires and pandemic as retribution. Many of the world’s creation stories – myths – feature punishment of sinners (blasphemers, heathens, infidels, deviants; all those others) so that the “righteous” and chosen can lead the way.

Perhaps. Or perhaps the “righteous” might be the very same ones who led us into this mess in the first place.

Then again, Australia – as the late great poet Les Murray informed us – is all drought and fire and flood. “We’ll all be rooned,” wrote another Australian bard.

Our crisis is not just because of flood and fire and Covid-19. The quality of our leadership as of late 2019 may help explain it. Don Watson expresses it best, with his straight-talking distrust of “weasel words”. Our leaders are generally “duck-shovers and deadbeats, incompetents, and cowboys” who comprise “a bunyip aristocracy … besotted with power, sectional interest and the dogmas of economic rationalism”.

In addition – and I go beyond Watson’s words now – our society scoops profit from quarries and prison-industrial complexes, builds border forces against refugees, is stingy with the homeless and battered and mentally ill, and only begins to value public institutions of health, education – and, indeed, of democracy itself – when our dependence on them becomes obvious.

We have the facts. Despite the quibbling and distractions, we know that climate change contributes to environmental disasters like fire, and diseases such as Covid-19. We also know climate change is caused by the damage we have done to the interlocking, natural systems of the miracle that is our planet.

I don’t wish to the deny the dangers and suffering of 2020 so far but I’d like to think that good may yet come. Global greenhouse gas emissions fell over the time of virus lockdown. Away from the screens and hustle there was often a relative calm, a lack of crowds, a change of pace. Rearrangement of transport and work protocols came under consideration, and cycling became more popular. We reflected on the importance of family and friends, noticed the birds. There are new heroes, and new ideas of what and who is “essential”. We cheer health workers, rely on teachers and carers and have, as Watson writes, “fallen for the scientists, the knowledge flowing on our screens, the honest reasoned arguments and, no less, the varieties of genuine humanity we have been seeing. The citizenry has sprouted heroes.”

After the fires but before the pandemic, Thomas Keneally hoped for a change in the national response to climate change. Riffing on the relationship between fire and many Australian plants, he said the fires might “germinate” action.

A veteran of an earlier deadly virus reminded us that Covid-19 might give us the chance to “take the best possible advantage of new opportunities while preserving and extending the principles of Australian social democracy that have served us so well”.

That same social democracy has turned its back on immigrants, international students, casual workers, universities, tourism, the arts.

The fires have gone but they’ll be back. The virus lingers, ready to flare up again. I began thinking about this essay in late May, on Sorry Day in Reconciliation Week. “In this together” was the theme. Our leaders mouthed similar phrases. 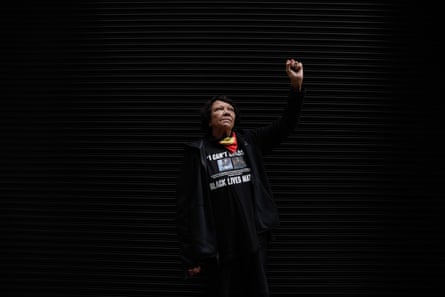 An Aboriginal site in the Pilbara was blasted into nothingness. A single plait of hair from 4,000 years ago, woven of strands of hair from several different ancestors, was as good as unravelled and cast to the wind. One expert compared it to the destruction of sacred artefacts by Islamic State.

A man in the US repeated the exact words – “I can’t breathe” – earlier used by David Dungay in Australia. Both were killed by law-enforcement officers. Both knew racism and imprisonment. The proportional incarceration of Aboriginal people is even higher than African Americans in the US.

A 20th century poem by Jack Davis about a prison death has the refrain, “A concrete floor, a cell door, and John Pat.”

Since the royal commission into Aboriginal deaths in custody 30 years ago there are now more than 430 more Aboriginal names that could be inserted at that end-of-the-line.

Racism burns like a pox and a plague, and is incubated at the centre of how we live and organise ourselves.

We’re not all in it together.

It’s probably not a matter or a tweak or mere adjustment. A vaccine might do it. Reconstructive surgery? Can such a thing ever be minor?

I began with an Aboriginal story of fire. The award-winning book The Biggest Estate on Earth tells us that in Aboriginal stories, “the tone is theological, the teaching ecological”:

A mobile people organised a continent with … precision … They sanctioned key principles: think long term; leave the world as it is; think globally, act locally; ally with fire; control population. They were active, not passive, striving for balance and continuity to make all life abundant, convenient and predictable.

Fire was used to shape the landscape in order to “channel”, “lure” and “persuade” resources to gather at places of easy access. A “rich spiritual life” and “time spent nourishing the mind” produced a “voluminous and intricate” art.

Aboriginal heritage and the natural environment need to be at the centre of any national reconstruction. In A Rightful Place: Race, Recognition and a More Complete Commonwealth, Noel Pearson says there are three parts to our “national story”: Aboriginal cultural heritage, the inheritance of British institutions and our multicultural achievement.

Put it like this: Aboriginal cultural heritage is a major denomination in this country’s currency of identity and belonging. It includes the experience of racism. For most of our shared history, its classical form has been denigrated and almost destroyed, along with its connection to a descendant community. It needs investment and fair rates of exchange. At the same time, I have some respect for the western canon and Sir Francis Bacon’s words that any currency, like shit, is “of very little use except it be spread”.

And my little group from the beginning of this essay? Aboriginal-led, we want to regroup and share our blossoming heritage with the region’s wider community, who, to judge by their Kukenarup memorial and efforts at land rehabilitation, are trying to come to terms with their own part in our shared history. It might be a model of reconciliation for the nation. However, the denigration and attempted destruction of Aboriginal heritage and the trauma, turmoil and disempowerment of its community are connected.

While there’s potential for healing and a transformed relationship in processes of consolidating and sharing a pre-colonial heritage, the neoliberal context of dog-eat-dog and the primacy of the market means there’s also plenty of opportunity for a community to be split and to destroy itself over brokerage rights. So here’s another fact: it’s hard to reconcile and restructure without respectful, supportive infrastructure.

We need the Uluru statement, and a Voice.

o This essay will be part of the anthology Fire, Flood and Plague, edited by Sophie Cunningham and published by Penguin Random House in December

Cat and mouse on the high seas: on the trail of China’s vast squid fleet

The tardigrade in the ice hole: how extreme life finds a way in the Arctic

British farmers turn to homegrown force to bring in the harvest