The wrecks protrude from the water on both sides of the causeway: the ruins of steamships, intentionally sunk in the narrow straits between small islands during the first and second world wars, to protect the naval fleet from German submarines. These “blockships”, which rise like a rusted tiara from the waves, can be easily reached from the shore at low tide.

We wade out from the sand at Glimps Holm, an uninhabited islet set low in the water, and swim out to where the great underbelly of the SS Reginald – resting here since 1915 – is bared and open to the elements, corroded to a deep blood-clot brown. Fulmars gabble upon its higher reaches, bedding down wherever they can find a foothold. Dry grasses growing in thin seams along the ledges of the hull shiver in the breeze, 10 feet above the water.

From the shore, the ship seemed grand, even statuesque, but close up I find it a strange and almost frightening presence. I steel myself to approach it, reach out and touch its hull – and find it cold and unyielding to the touch. 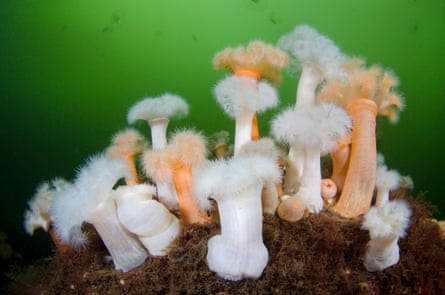 The wrecks of Scapa Flow have come to form rich artificial reefs – tiny solid islands on a seabed of silt and sand, upon which benthic life might anchor itself. These blockships, accessible from the shore, are a glimpse of the riches that can be found in the wrecks of the deeper waters – where the remains of a German fleet, scuttled in 1919, rest in peace. Sunstars and sea slugs, sea lemons and squirts all make their homes between the rusted railings.

Sea urchins in pink and green are set like jewels; the harsh lines of the industrial age are softened by undulating forests of plumose anemones and feather duster worms. Crabs and lobster glare out from the darkest recesses. Wrasse sweep over the wrecks in shoals.

Where we are, ducking between struts at the water’s surface, we watch tiny fish darting within the mass of metal. We heave like seals on to the lower reaches of the bow; look out over the wreck, consider it afresh: a bright afterlife, if ever I saw one. I hope to be so fruitful once I am gone.

Specieswatch: each octopus arm may have a mind of its own

Blasts from the past: how ice age ponds are coming back to life