One in three children around the world have concentrations of lead in their blood at levels likely to cause significant long-term health damage, new research has found.

About 800 million children and young people under the age of 19 are likely to have blood levels of lead at or above 5 micrograms per decilitre (5ug/dl), according to the report.

There is no safe level for lead exposure, according to the World Health Organization, because even at very low concentrations it operates as a dangerous toxin, but levels above 5ug/dl are regarded by the US Centers for Disease Control as a cause for action.

The findings, from research by the Institute for Health Metrics and Evaluation, and published by Unicef on Thursday, highlight the ongoing dangers to children from lead, which has been phased out of common use in petrol, paints and water pipes over decades.

“This is an absolutely shocking figure,” said Nicholas Rees, policy specialist at Unicef and author of the report. “We have known for so long about the toxic [nature of lead], but we have not known how widespread it is, and how many children are affected.”

Lead is a potent neurotoxin and high exposure can kill, while lower levels cause symptoms ranging from pain, vomiting and seizures to developmental delay, mental difficulties and mood disorders. The lower levels can also cause children to be born prematurely.

Exposure at the levels studied is likely to cause reductions in cognitive ability, higher levels of violence and longterm health impacts such as cardiovascular disease, according to the researchers.

Children are particularly vulnerable to lead exposure because it damages the developing brain and nervous system, building up over time, and the impacts do not show immediately. Lead mimics calcium in the bones, building up in people’s bodies and causing damage to other vital organs, including the kidneys, heart and lungs.

Richard Fuller of Pure Earth, an NGO that collaborated with Unicef on the report, said people were less aware of the damage caused by lead, after campaigns to remove the toxin from many common uses in developed countries decades ago.

“We did a terrific job of taking lead out of gasoline [petrol], but the use of lead has plateaued after falling in the 1970s and 80s,” he said.

Lead at 5ug/dl of blood is likely to wipe about 3-5 points from a child’s IQ score, and at the levels found in the Unicef report could double the level of violence in society, said Fuller. It is also likely to increase the risk of cardiovascular disease, as about 900,000 deaths a year are already linked to lead poisoning.

Fuller said that while the levels of lead might seem small, across populations the damage was significant. “It means double the number of people who are intellectually impaired,” he said. “It is definitely not a trivial issue.”

He said about 30 academic studies had linked elevated lead levels to people’s propensity for violent behaviour, providing enough corroboration for scientists to make a strong association between continuing lead contamination and its likely impacts on violence. 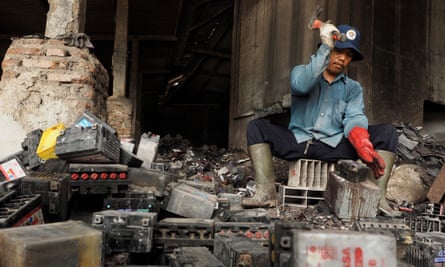 Scientists know more about the damage lead causes even at small concentrations than they did previously. Until recently, the US judged that levels above 10ug/dl were a cause for concern, but changed this to 5ug/dl in 2012 as more evidence became available.

One of the leading causes of lead poisoning is the disposal of car batteries, which use lead and acid to generate an electrical charge, and make up 85% of the lead used globally. When disposed of safely, they pose little risk, but in many countries about half of car batteries are recycled without safety precautions.

When this happens, large quantities of lead and lead compounds are spilled, poisoning people who come into contact with the liquid and solid products, and contaminating the soil for years.

A further cause of lead poisoning is the use of lead compounds, such as lead oxide and lead chromate, as a food additive to make spices appear more vivid in colour. The compounds are used to make turmeric appear bright yellow, and sometimes used with paprika. The report found examples of its use in India, Bangladesh, Georgia, the Balkans, north Africa and sub-Saharan Africa.

Children in developed countries are also at risk, from sources including old water pipes, lead paint and contaminated soil. In the US, children living in poorer households and dilapidated accommodation have been found to be at higher risk. In the UK, about 200,000 children are likely to be affected, according to Unicef.

The UK decided in 2018 against conducting nationwide screening of lead levels, making it hard to judge where children and adults are most at risk, and the UK still only regards levels over 10ug/dl in children and pregnant women as being of concern, though that may change later this year.

Privatised water companies can replace lead pipes without charge, but there is no obligation on them to find out whether people are still being served from lead pipes, leaving many people unaware of the problem. Homeowners must pay for replacing pipes on their own property, which may be beyond the reach of some people, and landlords are not obliged to do the same for tenants.

Ovnair Sepai, principal toxicologist at Public Health England, said: “The estimate in this report has been calculated based on data from other countries, which means it is unlikely to accurately reflect blood levels in the UK.

“The UK has strict regulations in place for lead in food, water, cosmetics, toys, spices and industry. Lead exposure in children has dropped dramatically in the UK since it was banned in paint and petrol, but risks remain, which may disproportionately affect children in deprived areas.”

How a storm-stricken Scottish village was swallowed by sand

Countryside fit for a superpower? Inside China’s colossal rural revamp