Three Extinction Rebellion activists have locked themselves to a rig in the middle of the Thames to protest against a planned road tunnel underneath the river in south-east London.

The keys to the locks around the protesters’ necks have been delivered to the capital’s mayor, Sadiq Khan, with a note asking him to come and talk to them. However, the mayor’s office issued a statement ignoring the request and confirming plans to build the Silvertown tunnel are continuing.

To highlight serious concerns about greater air pollution in the boroughs of Greenwich and Newham, the activists sailed to the rig on a dinghy at dawn on Saturday and attached bike locks to the structure and around their necks. A banner was unfurled stating: “No toxic tunnel.”

Metropolitan police officers arrived about five minutes after they boarded the rig. Speaking from shoreside, an Extinction Rebellion spokesperson said: “We are immensely proud of our brave activists who are standing up for the respiratory health of local residents and the wellbeing of future generations.”

They added: “The man with the power to stop this is Sadiq Khan. He has refused to listen to any of our legal means of appeal. The keys to the locks around the necks of our activists have been delivered to City Hall this morning with a note asking Sadiq to come and talk to us.”

The group said the tunnel could create a superhighway for high-polluting lorries and may not ease congestion locally as vehicles may use the same feeder roads. “The air [here] is already toxically polluted and people are dying as a result,” they said.

However, the mayor’s office confirmed it would continue to build the tunnel, as the “existing infrastructure is both antiquated and worn-out”.

“It is possible to reduce congestion and improve river crossings in the east of London while also tackling air pollution,” a spokesperson said.

“Introducing tolls on both the Blackwall tunnel and at Silvertown – and the extension of the Ultra Low Emission Zone from 2021 so that Silvertown will be within the area covered – will play a crucial role in tackling congestion, improving overall air quality and providing much-needed additional bus services across the river.”

TfL has also said the tunnel would provide better access to jobs and services, and improve the road network following new developments in Greenwich and the Royal Docks.

Activists fear the creation of the tunnel itself, forecast to open in 2025, will create thousands of tonnes of CO2. Unconfirmed reports suggested a drill on the rig may have been undertaking preparatory work for the tunnel by monitoring seismic activity before the main borehole is dug, following the commencement of engineering work last month.

A Met spokesperson said: “Police were called shortly before 5am on Saturday 25 July to reports that three protesters had gained access to a ‘rig’ on the River Thames in Greenwich. Officers, including the Marine Policing Unit, remain in attendance.”

Extinction Rebellion activists claimed a police liaison officer warned them that the trio who locked themselves to the rig could be held until Monday on terrorism charges. However, the Met said this was inaccurate. 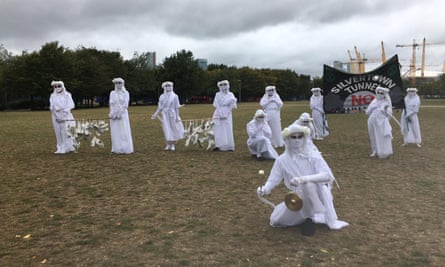 Meanwhile, a separate action by another Extinction Rebellion group took place to commemorate “the 26 lives that are lost due to air pollution everyday in London“. Protesters dressed in white staged a procession at Greenwich peninsula beneath the cable cars holding a banner saying “Silvertown Tunnel, no”.

Simon Pirani, a senior research fellow at the Oxford Institute for Energy Studies and author of a report on the environmental impact of the project, said: “The tunnel is completely at odds with London’s claim to be at the forefront of fighting climate change. In an emergency, you don’t do something which is going to make the problem worse.”

Cat and mouse on the high seas: on the trail of China’s vast squid fleet

Country diary: a shrieking cry summons me back to the Himalayas

‘It’s all on hold’: how Covid-19 derailed the fight against plastic waste