Tackling systemic racism is fundamental to achieving environmental and climate justice, according to leading activists, as Covid-19 disparities and the global uprising against police brutality lay bare the ramifications of racial inequalities in every sphere of life.

A wave of protests demanding an end to racist policing have taken place in towns and cities across the world amid mounting evidence that brown, black and native communities have also been disproportionately impacted by the coronavirus pandemic.

Increasingly, experts and protesters have identified racial injustice as the common denominator in police violence, as well as environmental and health inequalities linked to poor Covid-19 outcomes. And on the streets, what started as Black Lives Matter protests have morphed into a movement for racial justice amid growing recognition that systemic racism denies people of colour equal access to economic, social, environmental and climate justice, as well as health equity, political power, civil rights and human rights.

“The disproportionate rates of [Covid-19] infection, hospitalisation and deaths are linked to lingering and persistent health, social, economic and environmental inequities facing black Americans, conditions which are rooted in oppression, discrimination, medical apartheid and structural racism … and which today have created a perfect storm,” said Peggy Shepard, co-founder of WE ACT for Environmental Justice, at a press conference this week.

In the US and the UK, research has found that people of colour suffer more air pollution than white residents. Poor air quality, which is linked to multiple respiratory and cardiovascular conditions, significantly increases the risk of death from Covid-19.

As the crowds have grown, so have demands for radical reforms.

“Racism is built into America’s DNA, and since 1619, black Americans have had to endure this violent and oppressive system … Covid 19 exposed our nation’s racial divide,” said Robert Bullard, distinguished professor of urban planning and environmental policy at Texas Southern University and co-chair of the National Black Environmental Justice Network (NBEJN).

The NBEJN, an organisation founded in 1999 to address the environmental racism faced by black communities across the US, this week relaunched with a pledge to create a roadmap for a broad environmental justice agenda viewed through a racial justice lens.

“Environmental racism kills, air pollution and rollbacks to environmental protections and regulations make it hard for black people to breathe. At NBEJN we are connecting the dots,” said Bullard.

Globally, the environmental and climate movement has long faced criticisms of failing to understand the crucial role of racial justice in terms of both impact and solutions.

In the US, the environmental justice movement emerged in the 1980s in part because neither white-dominated environmental groups nor civil rights groups considered the disproportionate dumping of toxic waste in black neighbourhoods as part of their agenda.

The birth of the movement was cemented in 1991 at the first national people of colour environmental leadership summit attended by academics and leaders from black, Latino, Native American and Asian American communities, including Robert Bullard, who drafted 17 principles of environmental justice. 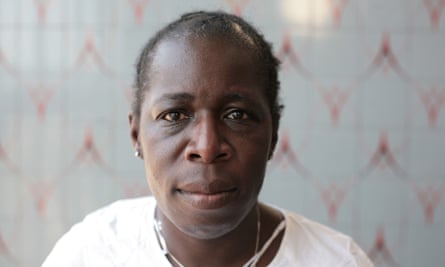 The UK has lagged behind. But widespread protests in solidarity with the Black Lives Matter movement have also evolved into a reckoning with Britain’s racist past and present – including within the environmental movement.

Rosamund Kissi-Debrah is a World Health Organization advocate for health and air quality who has campaigned for greater awareness and tighter pollution control since the death of her nine-year-old daughter, Ella, in London from a rare form of asthma. She was one of many critics of a Public Health England review that failed to consider air pollution as a factor in the higher rates of coronavirus deaths among BAME groups.

Kissi-Debrah said many BAME activists feel they are not given the same platform and access to resources. “I think I have to work harder. I’m not resentful. That’s the way it is. Should it be that way? Probably not,” she said

Income inequality and job insecurity also play a part. Kissi-Debrah says black people in the UK are less affluent than other ethnic groups, and less likely to be able to spare time for meetings, protests or lobbying actions.

Madhu Krishnan, professor of African, world and comparative literatures at the University of Bristol and a climate movement supporter, said there were a large number of black climate activists in her city, particularly in Extinction Rebellion, but there was still a perception that it was mainly white and middle class.

“If you look globally at what happened to climate, a disproportionate amount of blame does need to go to the global north, especially the former colonial powers. Environmental reparations are owed,” said Krishnan. “And more thought needs to be given to solutions. The idea of carbon offsets simply reinscribes colonial frameworks.”

Daze Aghaji agrees that new groups like Extinction Rebellion are more inclusive and open to change than traditional organisations like Greenpeace.

“In recent weeks, the protest movement is really helping. People are more open to listen. It made people realise the US is not the only country with a systematic problem of racism,” she said. “We need a moment to really think how we relate to one another… The toxic system is something that we all have to live with.”

“To the white people who care about maintaining a habitable planet, I need you to be actively anti-racist. I need you to understand that our inequality crisis is intertwined with the climate crisis. If we don’t work on both, we will succeed at neither.”

Forgive us our trespasses: forbidden rambles with a right-to-roam campaigner

Will climate change end waterfront living? Not if you can afford it