y lockdown love story began when my glance fell on deep blue eyes. In a sunny glade, the spotlight fell momentarily on the searing blue micro-blooms of germander speedwell, Veronica chamaedrys, each 10mm across, and I was hooked.

Speedwells are a group of flowers with three same-sized top petals bullying a much smaller fourth, as if six o’clock was the least important time of day. I’ve known of them for years without paying much attention. V chamaedrys, also known as “bird’s eye”, is relatively tall at 40cm; most of the others are in the floral underclass, crawling and sprawling, without blooms so much as “bloomlets”. I searched my garden and, to my delight, found several other species within metres of each other, with definite and satisfying differences. 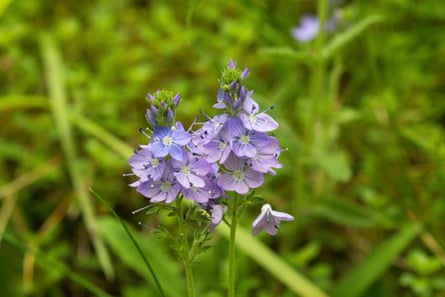 Slender speedwell, V filiformis, made a “glistening pool”, to borrow a phrase from Richard Mabey, of lilac on the lawn; there were multiflowered stems of the thyme-leaved perennial V serpyllifolia,each a Lilliputian skyscraper, with flowers of clotted-cream off-white; and the ivy-leaved V hederifolia, messily draped across paving stones with apologetic pinkish flowers, so small that you need a hand-lens to see them properly in a book, let alone the real thing. My locked-down world was suddenly that much richer and more varied, and all because of frowned-upon weeds.

Look them up and there are many more speedwells – ones adapted to marshes, to chalk, to rivers, to heaths. Some have hitched lifts here, such as the common field speedwell, V persica, from the Caucasus, from Russia but not loved, from stowaway to garden throwaway. There is a variety for every habitat under heaven. 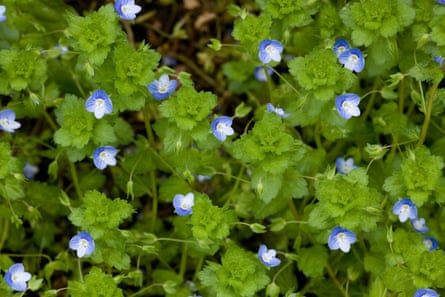 Herbalists have found many purposes for them, too. They have been linked to helping respiratory conditions, swellings and inflammations, and, with some supporting evidence from modern science, stomach ulcers. At one time they were seen as a cure-all; indeed, the common name can also mean “thrive well”. But another suggestion is that it means “goodbye”, since the flowers drop their petals when picked, the slightest breeze loosening them. Spikes of them used to be given to travellers for good luck. So, a flower used to wish somebody “bon voyage” grabbed my attention during the very time I couldn’t go anywhere. Perhaps now that we can travel modest distances again, we all need a speedwell to wish us on our way.

Country diary: when life becomes a matter of eat or freeze

Parts of England could run out of water within 20 years, warn MPs

Country diary: an exhalation in the alder carr