Heathrow will start using thermal cameras to carry out temperature checks on passengers within the next fortnight, as it called for common health screening standards around the world for air travellers.

The UK’s busiest airport said it would trial thermal cameras capable of monitoring the temperature of people in the immigration halls, initially in Terminal 2.

If successful, it will install the equipment in the departures, connections and staff search areas. Similar technology is in place at many Asian airports, for example at Singapore Changi.

John Holland-Kaye, the Heathrow chief executive, told MPs on the transport select committee that a common international standard for health screening in aviation was crucial to restoring confidence and encouraging people to return to flying.

He said: “Aviation is the cornerstone of the UK economy, and to restart the economy, the government needs to help restart aviation. The UK has the world’s third-largest aviation sector, offering the platform for the government to take a lead in agreeing a common international standard for aviation health with our main trading partners. 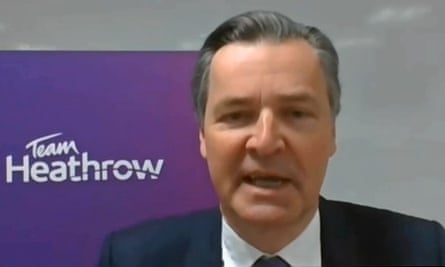 “This standard is key to minimising transmission of Covid-19 across borders, and the technology we are trialling at Heathrow could be part of the solution.”

He added: “If we are told that the only solution until we can get a vaccine in 12-18 months’ time is to socially distance in an airport, then tens of thousands of jobs will be cut. We cannot afford to wait that long to get flying again.”

Heathrow already carries out temperature checks at departure gates on passengers who are going to countries that require them. It said travellers would experience minimal impact to their journeys and noted that many airlines had been taking passengers’ temperature during the outbreak.

Before the Covid-19 crisis, 8o million passengers passed through Heathrow each year. The airport will release numbers for April on Monday that will show a 90% decline from 2019.

Patrick Ikhena, the head of travel at comparethemarket.com, said: “It is likely that, once restrictions are eased, international travel will look quite different for passengers – at least for the foreseeable future.

“There are likely to be more checks at airports and other major transportation hubs, which could include temperature checks and the requirement to provide evidence that you do not have Covid-19 before embarking on a flight.”

He said passengers would need to allow considerably more time to arrive at the airport than before the crisis, and this could lead to a surge in the number of Brits holidaying in the UK.

Customer research by comparethemarket has found that only 6% of Britons are considering a long-haul holiday this winter and just 9% are looking at booking a European beach holiday for this summer or autumn, “most likely due to a combination of strained household budgets and a wariness over travelling overseas”.

Blueprint is going out of print, but its glory days are not over yet

Power, majesty, wonder: the startling world of sharks – in pictures

Don’t despair: use the pandemic as a springboard to environmental action | Carlos M Duarte and others

How do you deal with 9m tonnes of suffocating seaweed?

Butterflywatch: May sun brings hope for a bumper summer

What else happened as coronavirus swept the globe

A swallow puts an end to our isolation | Letters